Michigan is known for its friendliness and diversity, encompassing everything from bustling cities to scenic countryside. Lansing, the state capital, combines the best of both worlds, combining the down-to-earth character of the Midwest with the refined comforts of the state capital.

Related: 4 Trees That Can Survive The Michigan Winter

Apart from its beautiful architecture and warm people, Lansing is home to some of the tallest trees. Forests have been one of the important features of the Lansing landscape. These landscapes provide a place for various recreational activities as well as a favorable habitat for many wildlife species.

Provided below are some of the tallest trees that can be found in Lansing:

Pin oak is a fast-growing red oak endemic to the eastern and central United States. It has a more graceful, slender aspect than other oaks. It tolerates damp feet and prefers acidic soils, although it may also thrive in dry, urban environments. Pin oak is a shallow-rooted tree that can be moved easily. The crown varies in shape from pyramidal to round. Pin oak trees don’t start producing acorns until they’re about 20 years old.

Due to its fast growth, good shade, and capacity to adapt to a variety of soil conditions, this resilient shade tree has become a popular choice. Green ash has been widely employed as a replacement for the American elm in urban settings across the United States since the emergence of Dutch elm disease. Unfortunately, the emerald ash borer is now attacking the green ash, and it is spreading across the country. The green ash grows to a height of 50–60′ and a spread of about 25′ at maturity level.

True hemlocks are tall pyramidal trees with purplish or reddish-brown bark, slender horizontal or drooping branches, and small blunt leaves growing from woody cushionlike structures on the twigs. When the little cones fall from the branch tips, they keep their scales. Two winged seeds adorn each scale. The North American eastern hemlock (Tsuga canadensis), also known as Canadian hemlock and hemlock spruce, grows to a height of 18 to 30 meters (60 to 100 feet) and has a trunk diameter of 1.2 meters (4 feet). It has grooves on the upper surface and two white bands on the lower surface of its dark green leaves.

Pyramidal trees with whorled branches and scaly bark, spruces are pyramidal trees with whorled branches and thin scaly bark. On a distinct woody base, each of the linear, spirally arranged, needle-like leaves are jointed near the stem. When the leaf falls, the base remains as a peg-like projection on the twig. Once fertilized, the persistent-scaled cones are egg-shaped or cylindrical and typically hang downward.

The white oak is a massive, powerful, and intimidating tree. The wide-spreading branches produce an erect, broad-rounded crown. It has a short stocky stem with enormous horizontal limbs. The leaves are dark green to slightly blue-green in summer, brown and wine-red to orange-red in the fall. The bark is light ashy gray, scaly or shallow wrinkled, varies in appearance, often broken into small, narrow, rectangular blocks and scales. The autumn foliage is spectacular. Oaks are pollinated by the wind. Acorns are typically produced when trees are between 50 and 100 years old. Acorns can be produced as early as 20 years in open-grown trees.

The American linden, basswood, or whitewood (T. americana) is a huge shade tree that can reach a height of 40 meters (130 feet) and produces wood for beehives, crating furniture and excelsior. Linden honey is pale and has a particular flavor, and it is a favored bee tree. The European linden (T. cordata), sometimes known as small-leaf or little-leaf linden, is extensively planted as a street tree. The Redmond linden (T. euchlora variation ‘Redmond’), an elegant pyramidal variety with a single straight trunk, is a hybrid Crimean linden (T. euchlora, a cross between T. cordata and T. dasystyla) that grows up to 20 metres (66 ft).

The northern red oak, Quercus rubra, is one of the region’s two most important oak species. Northern red oak is a red or black oak that differs from white oaks by having bristle-tipped leaves and acorns that develop after two years, as well as certain anatomical variations in the wood.

At maturity, the northern red oak reaches a height of 60–75 feet and a spread of 45 feet. 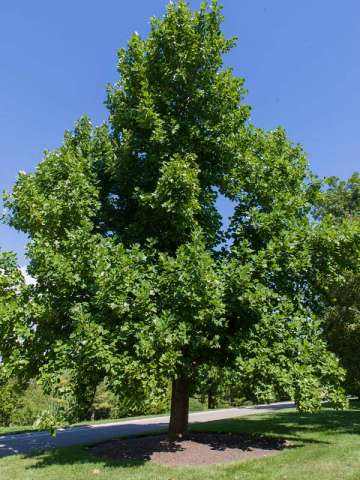 A fast-growing tree with bright green leaves that look like tulip blooms when viewed from the side and turn golden yellow in the fall. Greenish-yellow blooms with scented stems are borne high in the tree. This tree reaches a height of 70′ to 90′ and a spread of 40′. In acidic, loamy, damp, sandy, well-drained, and clay soils, the tuliptree thrives. It prefers moderate moisture, although, in humid areas, it can withstand drought.

The Ponderosa pine has a broad crown and a straight stem. It is the largest of the western pine species, growing to a height of 25 to 30 meters with a diameter of two meters and a lifespan of 400 to 500 years.

This species’ trees can grow up to 240 feet tall and have a diameter of 10 to 11 feet. Mature trees produce the world’s longest cones, which can be anywhere from 18 to 24 inches long.

The advantages of trees go far beyond the aesthetic value they add to the landscape. Trees emit oxygen, minimize stormwater runoff, provide shade, and provide a variety of additional social, environmental, and economic benefits. That’s why it is important and vital to understand what trees play in today’s ecosystem.